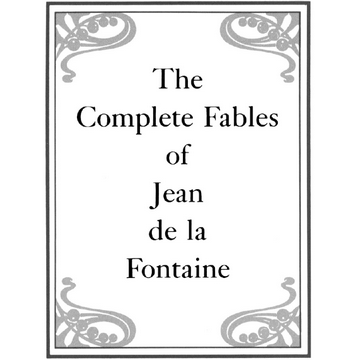 This edition of Jean de La Fontaine’s fables includes an English translation published alongside the French text. Norman Spector adapted the French text from the 1883-85 edition by Henri Regnier, adding four tales from the 1962 edition by Georges Couton. Spector’s translation is in rhymed verse, and remains faithful to the original not only in metrical patterns and rhyme schemes but also in tone: wit and le mot juste are skillfully and wonderfully combined. This translation gives the reader of English a chance to enjoy the grace, wit, and versatility of La Fontaine.

JEAN DE LA FONTAINE (1621-1695) was a French poet who is most well-known for his fables, which are regarded as classics of French literature. NORMAN B. SPECTOR (1921-1986) earned a Ph.D. in French from the University of Pennsylvania and was a professor of French and chair of the French and Italian Languages Department at Northwestern University. He was also the translator of The Romance of Tristan and Isolt (1973)

By Jean de la Fontaine, edited and with a rhymed verse translation by Norman B. Spector