Critical Prefaces of the French Renaissance 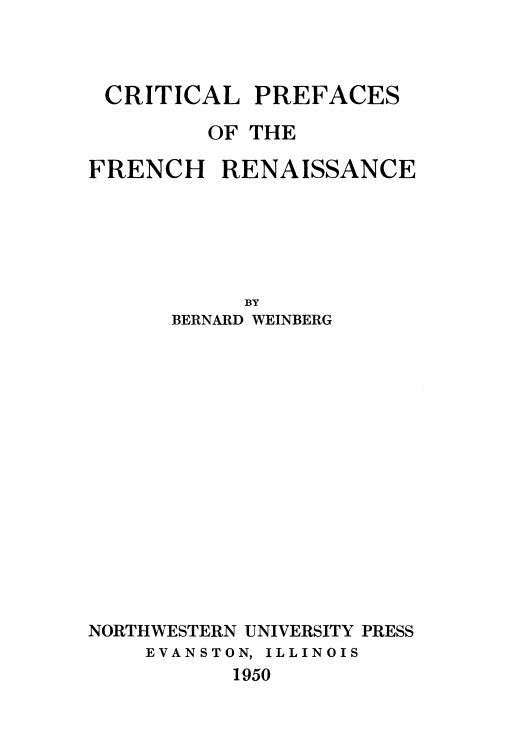 Critical Prefaces of the French Renaissance contains nearly 30 prefaces from the works of French poets and dramatists published from 1525 to 1611. Bernard Weinberg’s helpful book collects prefaces from the works of satirical poets, as well as dramatists, and provides a short introduction to each preface setting it in its literary and historical context. Lyrical and satirical poets represented vary from Marot to Du Bellay to Ronsard. Dramatists represented include Jean de la Tille and Larivey, among others. The larger introduction to the volume provides literary analysis of five longer texts by Sebillet, Du Bellay, Peletier du Mans, the obscure Pierre De-laudun, and Horace. Weinberg’s study brings attention back to these primary writings that are crucial for an understanding of the period.

BERNARD WEINBERG (1909-1973) was a textual critic, literary critic, and historian of criticism who designated his field of study as "Romance Philology." He was a passionate collector of books in Italian and French literature beginning with a notable array of Renaissance texts on literary criticism. He taught in the Department of Romance Languages and Literature the University of Chicago and later served as department chair.