D.H. Lawrence: The Failure and Triumph of Art 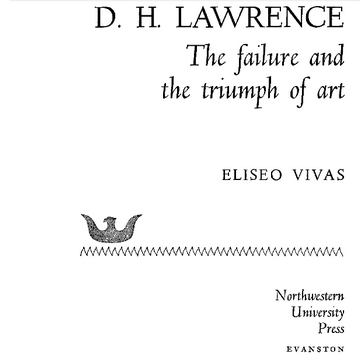 In D. H. Lawrence, Eliseo Vivas examines the aesthetic triumphs and failures of Lawrence’s major works through a literary device that he coins the constitutive symbol. Understanding how Lawrence uses the constitutive symbol provides new insight into his world views. Vivas covers a wide range of Lawrence’s work, including Aaron’s Rod, Kangaroo, The Plumed Serpent, Lady Chatterley’s Lover, Sons and Lovers, The Rainbow, and Women in Love. Vivas was one of the first scholars to use psychological criticism to read Lawrence’s works; Vivas’s and his particularly fresh reading of Lawrence’s novels continue to make this a significant literary-critical study.

ELISEO VIVAS (1901 - 1993) was a notable aesthetician of the twentieth century; his book Creation and Discovery remains a standard of aesthetic theory. He earned a Ph. D. in philosophy from the University of Wisconsin in 1935 and was awarded a Guggenheim fellowship in 1939. Vivas taught at several universities, including Northwestern University, where he was the John Evans Professor of Moral and Intellectual Philosophy.