For an Ontology of Morals: A Critique of Contemporary Ethical Theory 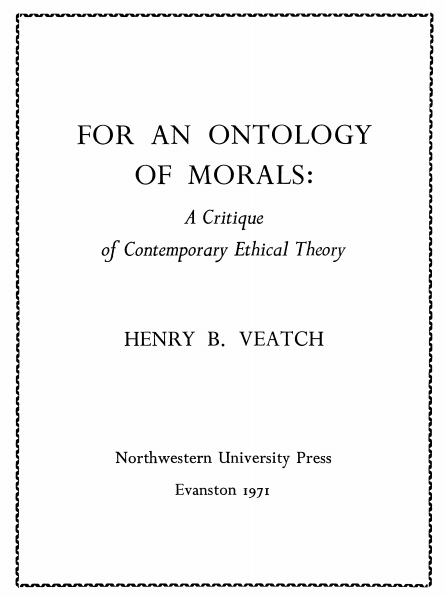 For an Ontology of Morals: A Critique of Contemporary Ethical Theory assesses contemporary trends in ethical theory, including the deontological tradition dating back to Kant, the teleological tradition of the utilitarians, the analytic movement, and the existentialist-phenomenologist movement. In refuting these trends, Henry B. Veatch argues that moral and ethical distinctions cannot be rightly or adequately understood if they are regarded simply as matters of linguistic use but are grounded in the very being and nature of things.

HENRY BABCOCK VEATCH (1911-1999) obtained his Ph.D. from Harvard in 1937 and spent his career at Indiana University, Northwestern, and Georgetown, where he was Philosophy Department Chair from 1973 to 1976. Veatch was a proponent of rationalism, an authority on Thomistic philosophy, and one of the leading neo-Aristotelian thinkers of his time.

By Henry B. Veatch