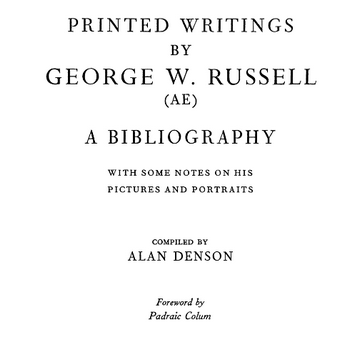 This bibliography lists the books, paintings, and portraits of the mystic Irish poet George William Russell, best known by his pseudonym, “AE” Russell was a late nineteenth-and early twentieth century Irish poet and essayist whose first book of poems, Homeward: Songs by the Way (1894), established him in what was known as the Irish Literary Revival.</DIV>

GEORGE WILLIAM RUSSELL (1867-1935), better known by his pseudonym AE was an Irish poet, painter, economist, and journalist. As a poet he was a major figure in the Irish literary revival of the late nineteenth and early twentieth century and influenced James Joyce.