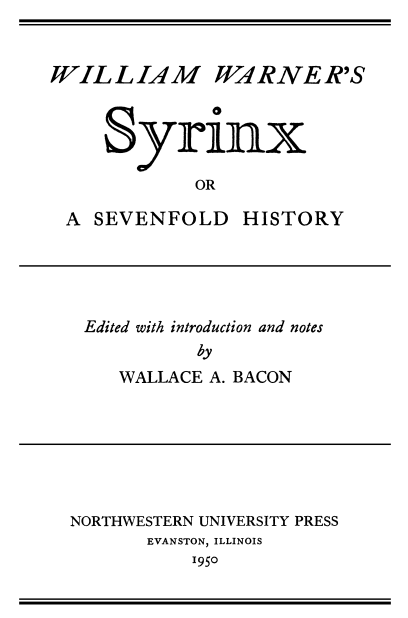 William Warners Syrinx, or a Sevenfold History, may be the first English novel. Unlike others of the time, though, Warner wrote a realistic novel whose ancestors include the adventure stories of Alexandrine romance, and focus not on the tales of an aristocratic class but on the lives of middle-class individuals. Wallace A. Bacon’s critical edition brings Warner’s important novel –with its young protagonists being dragged through many adventures, tried and tested by Fortune, with their tales being brought to a close by auspicious gods– to life, preserving it and introducing it to new generations of readers. Bacons critical apparatus, including an extensive introduction, provides significant context for Warner’s work, assessing its key role in the history of the novel and in the history of early modern literature.

WILLIAM WARNER (1558-1605) was an English poet and lawyer. WALLACE A. BACON (1914-2001) earned his Ph.D. at the University of Michigan and an LL.D. from Emerson College. He taught early modern theater at Northwestern University for many years and founded what is now the Department of Performance Studies.

By William Warner, edited with introduction and notes by Wallace A. Bacon